‘THE WORLD IS LOOKING TO YOU COP26’ powerful OOH campaign reveals an extra punch this week demonstrating opportunities for deeper viewer engagement.

Tapping into a deceptively simple use of mobile, the campaign turns major OOH sites surrounding the COP26 conference into augmented reality portals, taking delegates travelling to COP26 directly to the frontline of the climate crisis.

Where we haven’t been able to show the full context of the image, we’ve used QR codes to transport viewers into the Alarming Reality of the climate crisis people are facing around the world. See example below. The codes link to cop26.watch, which hosts confronting 360 views, videos and documented stories captured from climate disasters around the world. 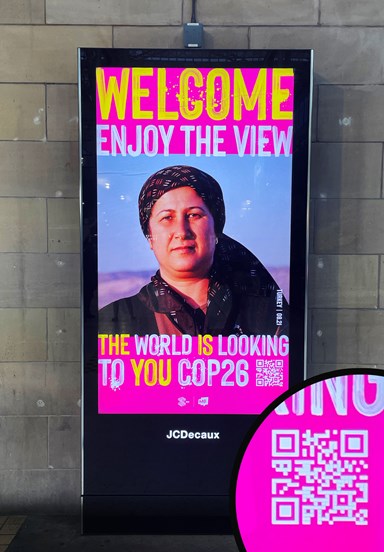 Scan the QR code to experience it for yourself

Alongside the QR codes, contextual lines have been written in ‘Urgent Genius’ style to tap into the topical happenings of the day. At Euston Station, as delegates faced delays to their journeys up to Glasgow, due to extreme weather, the message on the departure board takeover couldn’t have been more appropriate.

Featuring on DOOH sites with dwell time, the portrait of Douglas Pratt takes the viewer to the reality of his climate crisis in South Carolina. Captured by Gideon Mendel in aftermath of hurricane Florence, we see the devastation of extreme flooding that damaged over 11,000 homes in the area, estimated to cost $2 billion.

Elsewhere, tightly cropped portraits of Arife reveal the truth of her situation via augmented reality. The 360 visualises how devastating the effect of the changing climate have been on Arife’s livelihood. Due to the changing climate, the temperature in Turkey has risen year on year, with a record 49.1 degrees recorded in July. Coupled with poor land management and reduced rainfall, the vast blue lake she spent so much time on is now dry, cracked, arid and dusty. 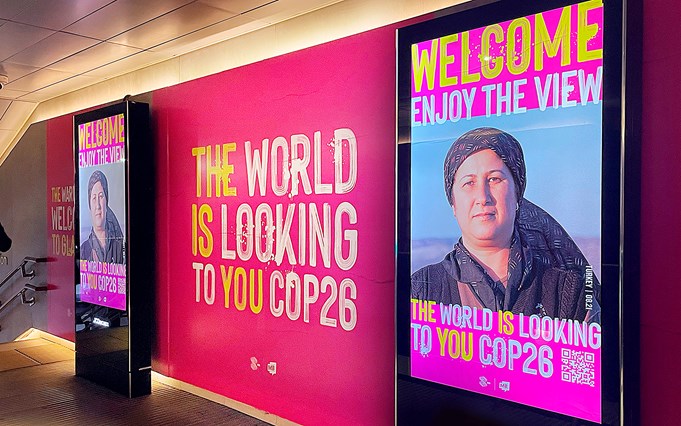 Grant Hunter, Global ECD at Iris said: “The world needs to see the whole picture of how the climate crisis is affecting people across the globe. To see the dried-up lake in Turkey, which used to support Arife’s fishing community, in full 360 really brings home the Alarming Reality we are all facing.”

The Alarming Reality went live in DOOH spaces across the UK on Monday 8th November, amplifying the sense of urgency surrounding COP26 for the final week of the conference.

Channel 4 News: what really happened when Iris tried to bring the alarming reality of the climate crisis to COP26

Should You Be Concerned about Price Collusion? – Machine Intelligence

Be the first to hear what we’re up to

We use cookies to make this website work better for you and to track site visits anonymously. You can opt out if you like.Tell me more